A Digital Waterfall in the City 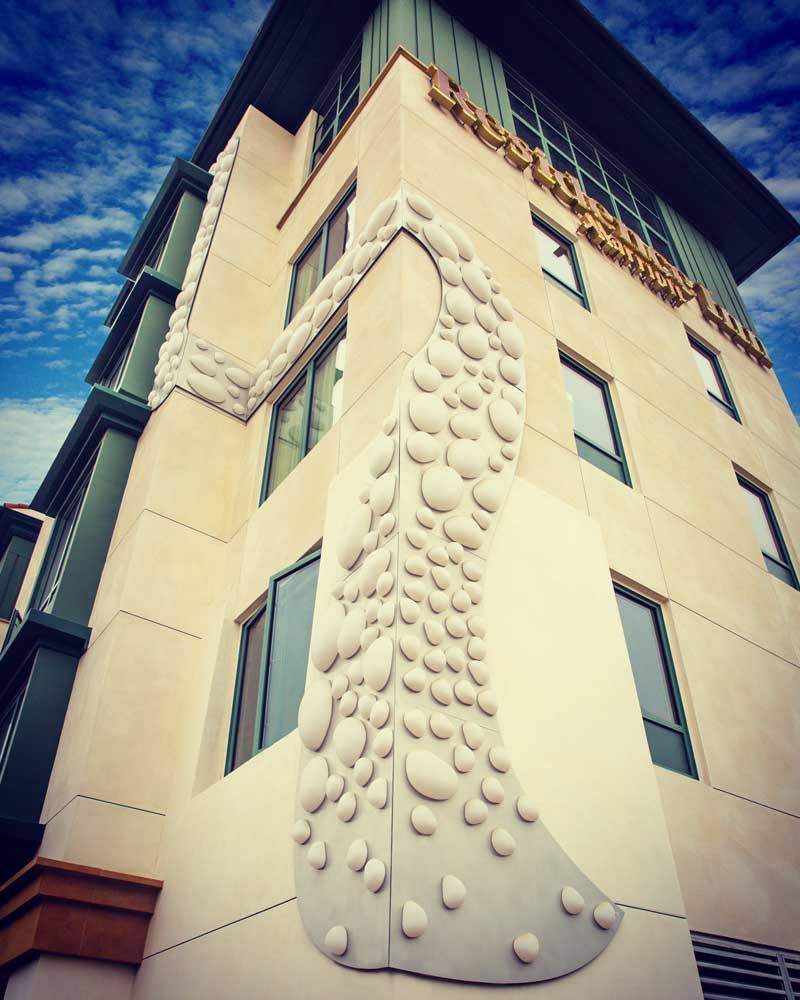 The commission, with a marked awareness of the current condition, starts from one of the most basic elements of the earthly ecosystem to encourage citizens to reconsider its cultural relationship with the ever increasingly fragile stability of the planet.

Recent photos of the dried out California reservoirs contrast the fleeting cinema graphic images of the land of American dreams. The water crisis in California demonstrates its vulnerability despite the fact that it is among the richest areas on the planet. This project celebrates in a modern language the beauty of the water that we are risking to lose in one of its most magnificent manifestations: a waterfall.

This new public artwork is a permanent gateway to Pasadena Old Town, it is an interactive outdoor light installation on the facade of the Residence Inn Marriott in Pasadena. The eye-catching sculpture consists of a 47-foot aluminum structure and custom LED modules embedded with the architecture of the hotel. It is visible from the 210 Interstate at N Fair Oaks Ave and Corson St.

The artist, Alessandro Marianantoni, had this to say: “This project has been an incredible experience that accentuates the beauty and grace of a waterfall. We also wanted to highlight the importance of water conservation, especially for the state of California. Due to the intricate nature of the composition, Pasadena Waterfall also demonstrates how technology and nature can be fused, working together toward a common goal.”

The main concept of Pasadena Waterfall is the simple beauty of a waterfall, along with a message about water conservation. In addition, the sculpture is a marvel in the field of art and technology, as the light modules were created through a combination of Fibonacci and Voronoi algorithms.

The Fibonacci series have been used by scientists to describe and map natural objects such as plants, flowers, water, human bones, and the solar system. Designed by MEDIARS LLC, there are 185 custom light modules in translucent Polyethylene using 400 Philips iColor Flex LMX gen2 LED elements, which are individually controllable.

The Polyethylene modules are fabricated with a rotational molding industrial process at MODRoto. The aluminum structure was produced and installed by Tractor Vision. TouchDesigner was the platform used to develop the custom lighting controller.

MEDIARS LLC (www.mediars.la) handled the design and production, working as a one- stop shop. Marianantoni adds, “The intent of this project was to bring awareness to one of the Earth’s most important natural elements, water, because its presence is responsible for community settlements and for all living things. Water is the expression of energy and serenity within the scope of natural beauty. The waterfall in Pasadena’s Arroyo Seco, specifically the Switzer Waterfall, was the inspiration for this artwork.”

The Pasadena Waterfall project engages people physically and appeals to their presence in the digital world at the same time. Pedestrians and visitors who are walking or standing by can activate the waterfall’s release. More people near the installation will trigger a richer waterfall effect.

The installation creates a playful, responsive and meaningful experience generated through its embedded, interactive computer system. To optimize the workflow, the artist developed a simulation system that made it possible to test and design the animations months before the building was completed. After dusk, when the lights are visible, the aluminum surface reflects the lights creating unique glowing effects.

“Public arts programs such as these have been shown to keep people engaged in their community. – continues the artist– My way of working is multi-faceted in order to best involve the public. I prefer using different means of communication. Though technology is a crucial element of modern life, programs like this make it possible to communicate with people in a contemporary language” concludes Marianantoni.

The artist Alessandro Marianantoni would like to extend his appreciation to the City of Pasadena Public Art Program, R. D. Olson Development, and public art advisor, Beatrix Barker.

Alessandro Marianantoni is an Italian artist who works internationally on artistic, cultural and entertainment-based projects with an emphasis on new media and technological innovation. Based in Los Angeles, he has produced and presented innovative projects in the U.S. and Europe. He has worked at UCLA REMAP in theater, film and television, which allows him to expand his research in various areas of interest, including culture, technology, including smart buildings, the environment and the Arts, with a unique, multi-disciplinary approach.